As of 12th September 2020, Yvonne has 37 eBooks available on Amazon’s Kindle store. Paperback versions are currently being produced through Amazon from late 2020 onwards. As of 7th February 2021 there are just 7 books to be converted to their paperback equivalents – a massive achievement!

Her first two series, each with 5 books, have their own separate websites.

When The Sax Man Plays Series

Tasters of more of Yvonne’s books…

WTSMP and All That Jazz – The hotly anticipated follow on to the popular When The Sax Man Plays series. Find out how life has moved on.

Inexorable – Revenge Plans Renounce Her. A mix of murder, erotica and life – told from the perspective of the murderess herself.

Putting The Visible In So Called Invisible Illnesses – A selection of fifty poems written by Yvonne Marrs looking at Invisible Illnesses from a sufferer’s point of view. From here, a charity music single was produced by Sir Joshua Francis, in order to raise awareness for fellow sufferers.

Following the characters from Yvonne’s popular ‘Football Crazy’ e-series, we find the foursome enjoying their retirement from the sporting limelight. Aiden had penned his memoirs, encouraged by Nicole’s writing know-how. Could there also be a cure for his permanent back problem since his and Justin’s car accident? Read on to find out how retirement treats them.

In their retirement, Aiden and Justin have time – finally – for reminiscence. But surely retirement wouldn’t be so relaxed?

This third Aiden Lewis book finds the foursome embarking on a European book tour. At home, Aiden challenges Nicole’s love of tennis to get her on the court, made easier by the move to another house that has it’s own state of the art court. Due to Aiden’s continuing health issues, his brother and sister-in law, Justin and Lynn, also move in. Read on to find out more.

The fourth book in the series shares Aiden’s ongoing battle with his health, both physically and mentally. We are also blown away by Nicole’s tennis ability as her partnership with Charlotte blossoms, both on court and off.

The fifth book in the series finds Aiden’s health struggles helped by a new GP to their surgery – while helping him, she steals his son’s heart as well. Find out how Dr Jacobsen juggles life with the Lewis family.

The sixth book in the Aiden Lewis octet finds our main character still bravely battling his medical conditions; while his brother can’t cope any more with being so helpless in it all. Justin is still convinced that this all harks back to their accident, and blames himself for Aiden’s torment. Will Justin get the help he needs to continue to support his poorly brother? Will Aiden’s condition improve, or worsen?

New additions to the Lewis family are introduced, and Harry’s wedding to Ann is rudely interrupted, not just once. Meanwhile, Justin’s struggles become physical as well as mental. Find out how everyone can cope!

The eighth and final book of the series finds the brothers both suffering with their health. Will the end of the series be the end for them both? Read on to find out what concludes the series.

1 – The latest fictional series by Yvonne introduces long term friends –  Austin and Yvette, Jack and Zoe – as they go through the highs and lows of their lives from being young and carefree into the responsibilities of adulthood. Moving to the Cornish countryside is the best decision for both couples, for different reasons; but if it is your destiny, it will happen regardless of whereabouts you live…

2 – The second book in the latest series from Yvonne shows how life in Cornwall differs to that the four friends had in the big city, but that doesn’t necessarily mean it is less lively. Austin and Jack play indoor five-a-side for the local team, but it isn’t exactly like it was in their youth. Yvette’s health problems continue, and Austin allows Tom, Zoe and Jack’s eldest son who is training to be a nurse, to help him out at times. Read on to find out more…

3 – The third book in the Can’t Buy Health series finds the local football team making strides in the big league with a star studded London game in the offing. Tom, Jack and Zoe’s eldest son, completes his nursing career and tries to move back to the capital. Austin admits he needs help dealing with his own and Yvette’s health struggles, while Zoe and Jack’s twins reach their pre-teenage years and Kim marries Rob in an unusual ceremony.

4 – Book 4 finds the manager of Cornwall’s Premiers writing his memiors, but he needs Austin’s input, as well as that of others in his team – can Austin possibly fulfil the brief, with Yvette’s declining health taking most of his strength? Tom finds love and a home back in Cornwall near his family, giving up his job in the District nursing team to become Austin and Yvette’s solo lifeline. Jack is trying to deal with his demons, and failing miserably, until Austin finds a specialist in London to help him. Will it work? Zoe is, of course, torn between her best friend’s battles and those of her husband, as well as juggling family responsibilities.

5 – The fifth book in the series sees Tom and Sophie fall in love, despite Tom’s misgivings over getting into another relationship.  Does his intuition tell him of the future, or is it his imagination? Yvette’s latest seizure affects her memory to the extent that she forgets Jack – and the two couples’ joint wedding.  Zoe helps Jack to overcome his illness challenges and Austin sends him to a specialist – will it work out? Jack and Austin continue activities with the Premiers, bringing the team more success.

6 – Book 6 finds our main characters, Austin and Yvette, in a kidnap situation. Austin has always pledged that he will protect his wife no matter what, but can he protect her from the masked men who are holding them captive?

7 – In the seventh book of the series, with Austin and Yvette still recuperating from their trauma, Tom takes over the idea to visit an arboretum in autumn – a perfect getaway. His new relationship with Emily is in the early stages, and he is tentative to let it progress after two heartbreaks. After a hospitalisation, Austin has to resign his position from the Premiers for the good of his health and Bob draws them up as MDs as a lasting legacy of the club’s. Yvette’s health too is declining, and they are thankful for Tom’s permenance in their lives. Read on to find out more.

1 – The continuing story from the Lewis household. A fictional tale following our characters throughout life’s dramas.

2 – The second book in the continuing story shows how Aiden’s health continues to decline, and the relationships around him strengthen. Charlotte is offered a knight in shining armour amongst all this in the form of Mike – but will she push away his good intentions after a painful divorce only months before?

3 – The third book in the series finds Ann and Harry taking on more family responsibilities. Mike and Charlotte arrange their wedding with the hope that both Aiden and Nicole will be well enough to be there on the day, or the whole idea is off. What will happen?

Introduction to… is to be updated. Yvonne felt it was only fair to include parts from all of her series, and not just the first two. This eBook was initially produced in 2015.

Harbourtown Murder – A special book written to fundraise for the MacMillan Respite Hotel in Bournemouth (sadly now no longer in business) within the rules of NaNoWriMo – it took 18 days to write this murder mystery set in fictional Cornwall.

You’ll also find that Yvonne is named as editor for her good friend, Stephen E J Tomporowski’s novels. More on the series can be found via this website: https://ravenofiskandarseries.com

Yvonne has had the pleasure of meeting her saxophone idol, Dave Koz, on many occasions in London. Dave’s music was the inspiration for the main character, Jason Bottelli, in the When The Sax Man Plays series! 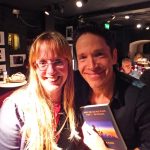 You’ll see that Dave is holding his copy of WTSMP 5. He is Yvonne’s most famous fan!